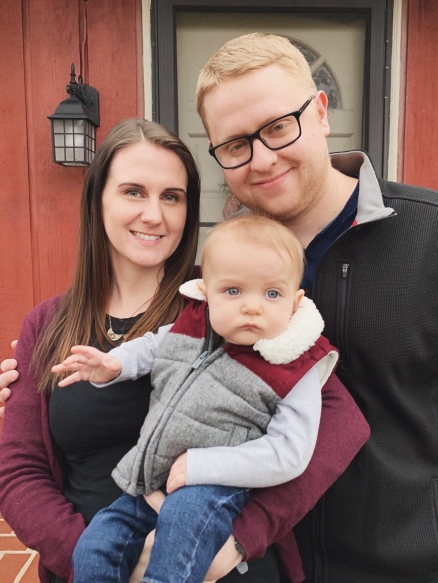 Hello, everyone! I’m Amanda Lindley and I’ve been a member of Calvary Baptist Church since 2017. I’ve been married since 2016 to my husband, Chase, and have been blessed to be a mother to our son, Kit, who turns a year old in April 2020. God has blessed me greatly and shown me so much since recently coming to Christ. Because of this, I felt it was time to share my testimony publicly to emphasize His grace and encourage others. I pray that through these words, He would be glorified.

I was raised in a United Pentecostal Church in St. Louis, Missouri, and was baptized there when I was 9 years old. The congregation was legalistic to the extent of requiring women to wear only skirts and keep their hair long, among other requirements. I didn’t fully follow these standards myself, but still believed the church’s doctrine was important and necessary to qualify as a Christian. When I was a teenager, I was in and out of church on Sundays and did not regularly attend. By adulthood, attending church was a rarity for me. Eventually, however, I began trying different kinds of churches in hopes of finding my place as a Christian. Non-denominational congregations seemed to be more “my style,” or at least more normal to me.

I always felt like I wanted to do the right thing and was always seeking the truth, but overall, I was uncertain. Claiming I was a Christian was an accessory to my lifestyle, which honestly looked no different from the world’s. Prayer was, more than anything, a way to make requests to achieve happiness, but my relationship with God was far from personal. I had some knowledge of Bible stories and the Gospel, but never read God’s Word entirely or regularly. I moved around Missouri frequently and felt I could never find my place. Eventually, I ended up in Jefferson City, where I met my husband at the Missouri Capitol.

At the time, Chase and I were not attending church at all. God was barely on our radar. We both came from a Christian background, mine charismatic and Chase’s Baptist, and occasionally discussed the subject. But we didn’t live our lives for Him. At one point, before we were married, we even concluded that we were on the same page in our beliefs, despite our differing backgrounds. We essentially dismissed the details as unimportant.

I thought I had an idea of who God was, but it was based on a shallow understanding and what other people told me. I had never investigated for myself. Some led me to believe God was angry at me for sinning and others had me thinking He was passive and would accept me just as I am, despite any wrongdoing. Ultimately, I had created my own muddled, yet convenient version of God – a false god that was impersonal and unreachable. This god had no real power or influence in my life because he was a god I was comfortable with that allowed me to live however I wanted.

Looking back, I now see that my Redeemer was there all along and He was about to reveal Himself to me in a way I would have never expected. After moving into a small rental house in an east Jefferson City neighborhood, I felt prompted to resume my search for truth. After visiting a few larger churches in town and still feeling out of place, Chase and I discovered there was a church just a few blocks down the street from our new home.

Something was telling me to visit this tiny church and I couldn’t get the thought out of my mind. After some hesitation, Chase and I finally walked through the doors of Calvary Baptist Church in October of 2017. We were greeted immediately by its members and quickly felt welcome. But it wasn’t just the people of Calvary who made us feel we had found something special. It was the pastor’s weekly messages that really drew my husband and me to this small neighborhood congregation. Pastor Justin Rich delivered sincere, gospel-driven sermons that challenged the way I looked at the world, Christianity, and my own faith. I recall Chase and I having dinner with Justin and his wife Heidi to get to know them better and share our stories of salvation. When it came time to tell my story, I fumbled around trying to explain my denominational background and baptism. I never provided a compelling answer for how the Lord truly impacted my life.

By December 2017, we decided to join Calvary and became members. During this time, the subject of doctrine came up again between Chase and me, since we were now actively attending church and regularly studying the Bible. We began to realize that our views on key issues, like the nature of God, were actually quite different. It quickly became a problem we couldn’t avoid. I began to feel we made a huge mistake joining a church that shook my views on God, my identity as a supposed believer, and my marriage.

With daily, unavoidable, and intense arguments erupting constantly, I knew it was time to do more than just attend church and check the box that made me feel like a “good person” each week. I decided to confront my uncertainties regarding my beliefs. In January of 2018, I began the process of reading my Bible from beginning to end. Every day, I begged the Lord to show me who He is and what He wanted me to know from His Word. I read about a fallen world and how the curse of sin separated us from our Creator. The Old Testament introduced me to an incomprehensibly holy God who loves His people and therefore confronts their sin with His standards. And in the New Testament, I was presented the solution to our issue of sin. Through Jesus Christ, a perfect sacrifice and our Savior, I could be set free. I had heard the story time and time again, but this time, it was real. It finally sank in. The Son of God took on the wrath we deserved. He died for me!

It’s easy to claim Christianity. I did it for years. But when I took time to study Scripture and examine the full scope and context, something changed. It was as if blinders had been removed from my eyes when I fully realized why Jesus did what He did on the cross. It may seem simple, but consistently hearing the Gospel at Calvary, reading the Bible for myself, and sincerely seeking Jesus are the means God used to bring me into a personal and intimate relationship with Him. This forever changed how I will live the rest of my earthly life. Made alive in Christ and dead to sin, I stopped searching for a way to accommodate disobedience to God. I was given hope for eternal life! (Romans 6:23)

Today, I’m not the same. I don’t look at this world in the same way. While I was once living for myself and pursuing happiness only to come up empty, the Holy Spirit intervened in my life by grace. (Ephesians 2:1-10) Declaring myself a “good person” and attending church out of obligation could never take away the fact that I was inherently broken and in need of a Savior. I could never stand justified before a holy God without being given understanding from the Holy Spirit and truly accepting Jesus as Lord of my life. (Romans 5:9-10)

I can’t thank my family at Calvary enough for encouraging Chase and me in our daily walk with the Lord. I’m looking forward to continued growth and a lifetime of serving Him!